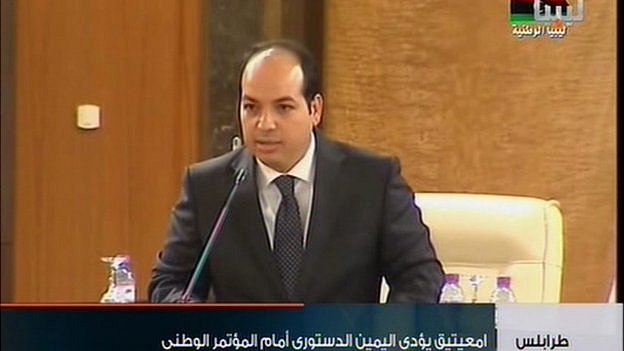 Libya’s Congress leader has rejected the appointment of a new interim prime minister hours after he was sworn in.
Ahmed Maiteg thought he had secured the support of 121 deputies after several rounds of voting in Congress.
But the process was held in a chaotic session, and acting Congress chairman Ezzedine Al-Amawi later declared the vote illegal.
He asked Abdullah al-Thinni, who quit following a gun attack on his family, to continue as caretaker.
The BBC’s Rana Jawad in Tripoli says a prime ministerial spokesman told local TV that Mr Thinni would comply with the request.
Mr Maiteg, from Misrata, was sworn in after the controversial vote was shown live on television.

He was initially reported to have secured 113 votes, falling short of the 120 required.
Deputy speaker Saleh al-Makhzoum later said Mr Maiteg, 42, had clinched 121 votes in the 185-seat chamber after voting resumed.
But some deputies later claimed it was illegal because Mr Amawi had already declared the session for voting over.
The vote was originally scheduled to take place on Tuesday, but it was interrupted when gunmen stormed the parliament – the General National Congress – forcing the deputies to evacuate. The building has been stormed several times by gunmen over the last year and a half.
Libya has been plagued by instability since armed groups toppled Muammar Gaddafi’s regime in 2011.
Mr Maiteg’s spell in power, if it was ever formally recognised, makes him the fifth prime minister to be appointed in the past two and a half years.
Elections for a new parliament that will replace the General National Congress are expected later this year, which is also expected to usher in a new cabinet.

From 2d ago 14.04 GMT Two years ago, Georgia was the state that decided control of the Senate in Democrats’ favor. This year,...
Read more

From 2d ago 14.04 GMT Two years ago, Georgia was the state that decided control of the Senate...
Read more