As Macron epic delivery ends, it also wraps up the opening session of the first virtual UN general assembly.

We’re going to close down the blog now, but here is a look back at a morning of speeches:

In these extraordinary times, the Guardian’s editorial independence has never been more important. Because no one sets our agenda, or edits our editor, we can keep delivering quality, trustworthy, fact-checked journalism each and every day. Free from commercial or political bias, we can report fearlessly on world events and challenge those in power.

Your support protects the Guardian’s independence. We believe every one of us deserves equal access to accurate news and calm explanation. No matter how unpredictable the future feels, we will remain with you, delivering high quality news so we can all make critical decisions about our lives, health and security – based on fact, not fiction.

Support the Guardian from as little as $1 – and it only takes a minute. Thank you.

Macron says US pressure campaign on Iran has failed

Macron is now criticising the US for withdrawing from the Iran nuclear agreement and for its sanctions.

“The maximum pressure strategy, which has been underway for several years, has not at this stage made it possible to end Iran’s destabilising activities or to ensure that it will not be able to acquire nuclear weapons,” Macron said.

“This is why France, along with its German and British partners, will maintain its demand for the full implementation of the 2015 Vienna Agreement and will not accept the violations committed by Iran.”

He adds: “We will not compromise on the activation of a (sanctions) mechanism that the United States on its own, leaving the agreement, is not in a position to activate.

“This would undermine the unity of the Security Council, the integrity of its decisions and it would run the risk of further aggravating tensions in the region.”

Remember, our diplomatic sources say this last speech of the morning session could be 40 minutes. Strap in.

Macron is seeking to assert himself as a global leadership figure as Trump and others step away from UN multilateralism in favour of nationalism and isolation.

He says he will outline five main priorities for France.

The first is “combating weapons of mass destruction and terrorism”, with Macron referencing Iran and France’s support for the nuclear agreement despite the US withdrawal.

French President Emmanuel Macron is up on the screens to end the morning session of the opening day of the general assembly, which has seen some of the world’s most powerful countries take the virtual stand.

Iran’s Hassan Rouhani has focused his talk on attacking the US for ending the nuclear agreement and imposing severe economic sanctions on his country.

Duterte was the first leader to exploit the rule that allows video graphics in their speeches.

His address was mixed with photos of Philippine forces and of the president himself, signing documents.

Rodrigo Duterte of the Philippines has appeared on the podium video screen.

Known for his striking speeches – including once comparing himself to Hitler – the president has started with a fairly standard UN speech, focusing on calling for international cooperation in fighting the pandemic and resolving global disputes, such as the South China Sea issue.

“I therefore call all stakeholders in the South China Sea, Korean Peninsula, Middle East, and Africa. If we cannot be friends as yet, then in God’s name let us not hate each other too much,” he said.

The Washington-back deals were seen as ignoring the Palestinians, who have rejected Trump as a peace mediator.

Events have slowed down a bit with Jordan and South Korea, both of whom are reiterating their long-standing policies.

Moon Jae-in, of Korea, is talking about peace on the peninsula and global cooperation.

Others are not yet convinced: 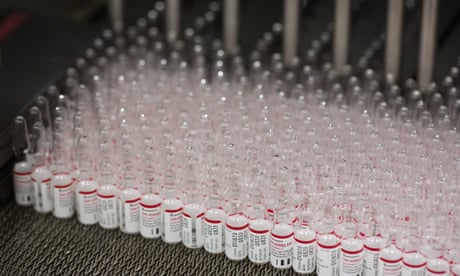 Vladimir Putin of Russia is up next.

He begins by arguing that the five permanent members of the UN Security Council should retain their “veto power” over UN resolutions despite calls for it to be reformed. Many members states say the veto rule is undemocratic.

Of course, Russia is one of those five permanent members.

Cuba is also giving China a run for its money in the video-call-background-competition (that I made up).

Díaz Canel has chosen to sit in front on a melange of palms and ferns, with the foliage somehow made even more verdant by green studio lights.

Nope! We’re back to drama.

The US, he said, had “an abundance of practically uncontrolled expressions of hatred, racism and police brutality.”

Matamela Cyril Ramaphosa, President of South Africa, was next.

2020 will be remembered for the Black Lives Matter movement, he said, going on to talk in generic terms about global cooperation.

“When history faithfully records the global response to the worst health emergency of this century, let it be said that we stood and acted as one, that we provided leadership, and that we gave the peoples of all nations hope and courage.”

Compared to Trump and Bolsonaro, his speech was much more subdued. Let’s see if that lasts.

As Chile’s talk continues beyond the 15-minute deadline, Julian Borger has some analysis on China’s news-making speech:

Xi Jinping adopted the role of the adult superpower in the room in his address, presented in front of a painting of the Great Wall. Unlike Trump, he spoke the language of multilateral diplomacy. And he made news, declaring that China’s carbon dioxide emissions would peak by 2030 and the country would reach carbon neutrality by 2060, targets the EU has been urging Beijing to agree to.

Xi also announced some donations to UN funds – $50m to UN’s Covid-19 relief fund, and $50m to the UN’s Food and Agriculture Organisation.

As it was a pre-recorded speech, there was no reaction to Trump’s attack, but there were some digs at unilateralism without naming the US or its president.

No country should “be allowed to do whatever it likes and be the hegemon, bully or boss of the world”, Xi said, which is a bit rich given China’s military build-up in the South China Sea and its aggressive posture on the border with India, not to mention its mass incarceration of Muslims.

“Burying one’s head in the sand like an ostrich or trying to fight globalization with Don Quixote’s lance will go against the trend of history,” the Chinese leader said, with a western literary reference apparently aimed at Trump. “The world will never return to isolation and no one can sever the ties between countries.”

Sebastián Piñera Echenique, the president of Chile, is now defending his government’s crackdown on protests this year.

You can read more about that here:

Trump’s UN speech is already and predictably being promoted as an election video:

Chile speaking now. After that, we have:

All of Europe Becomes A Battlefield (Translation of an article from Italian): U.S. B61-12 nuclear bombs transferred to Italy and “other European countries”.

(Note – I originally read this article in French...
Read more