Will White Supremacy Carry Trump to a Second Term? 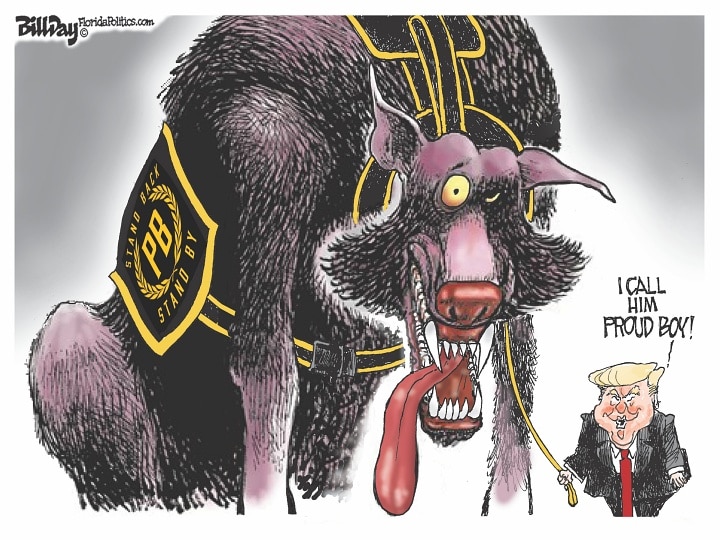 “For months, I’ve argued that this election is more than a choice between Joe Biden and Donald Trump,” said the MSNBC contributor and Washington Post writer. “It’s also a choice between American democracy and white supremacy, given Trump’s history of racist rhetoric.”

Appearing on MSNBC Saturday, Capehart began by citing Trump’s “thinly-veiled promise to save the suburbs.” He added that the president’s “message comes amid a stark racial divide in this country.”

Capehart summed up Biden v. Trump as a clear choice between “the Constitution and the equal justice under law it promises and a president who made racism and white supremacy the hallmark of his 2016 campaign and his presidency.”

He recalled when Trump began his quest for the Republican nomination in 2015 by claiming Mexican “rapists and drug dealers” were streaming over the border. In 2018, Capehart remembered, the president included neo-Nazi protestors in Charlottesville, Va., among “very fine people.”

Capehart cited this year’s tear-gassing of “fellow Americans taking part in a peaceful Black Lives Matter demonstration outside of the White House for a photo op,” Trump’s telling “the Proud Boys, the militaristic hate group, to quote ‘stand back’ and quote ‘stand by’ during a presidential debate.” He brought up the president’s “extraordinary efforts to suppress the votes of black and brown people, encouraging an army of supporters to quote, ‘monitor the polls’ through intimidation.

“All that is on the ballot in just three days.”

Capehart’s analysis reminded me of a Leonard Pitts Jr. column that ran in the Miami Herald in 2018. The headline was a grabber: “No, it’s not the economy, stupid. Trump supporters fear a black and brown America.”

“We’re going to try something different today,” he proposed. “Rather than pontificate yet again upon the motives of Donald Trump’s supporters, I’ll let a few of them explain themselves in their own words.”

“Robert: “President Trump has accomplished more positive things for this nation in less than two years than the last three have accomplished in twenty plus years. After the past eight years of a Muslim Marxist in the White House this nation could not survive another demwit in the White House. … Could you please list one thing the demwit party has done for the black people in America other than hand out government freeies for their continued votes?”

“Gary: “[America] has a constitution which guarantees equal rights for all and yet people like you hungar for change that puts people like me in the back of the bus. You seem egar to know what it would be like to be in the driver’s seat. You need look no further than Zimbabwe and South Africa. When people like you started driving the bus, the wheels came off. That’s what terrifies people like me.

Pitts said he offered his column “as a service for those progressive readers who are struggling with something I said in this space. Namely, that I see no point in trying to reason with Trump voters. I first wrote that over a month ago, and I am still hearing how ‘disappointed’ they are at my refusal to reach out. So I thought it might be valuable to hear from the people I’ve failed to reach out to.

“I’m sure some of you think those emails were cherry-picked to highlight the intolerance of Trump voters. They weren’t. They are, in fact, a representative sampling from a single day in May, culled by my assistant, Judi.

Pitts also posited that “it’s still an article of faith for many that the Trump phenomenon was born out of fiscal insecurity, the primal scream of working people left behind by a changing economy. But I don’t think I’ve ever, not once, seen an email from a Trump supporter who explained himself in terms of the factory or the coal mine shutting down.

“I have, however, heard from hundreds like ‘Matthew,’ who worries about ‘immigrants’ and ‘Gerald,’ who thinks people of color have an ‘alliance’ against him. Such people validate the verdict of a growing body of scholarship that says, in the words of a new study by University of Kansas professors David N. Smith and Eric Hanley:

‘The decisive reason that white, male, older and less educated voters were disproportionately pro-Trump is that they shared his prejudices and wanted domineering, aggressive leaders …’

“….But at the same time, let us be clear-eyed and tough-minded in assessing what’s happened to our country — and why. How else can we salvage it from the likes of ‘A Trumper’ who says Trump was needed to ‘get things back in order’ after the ‘terrible job’ done by President Obama?

“He wrote: ‘We’re sick of paying welfare to so many of your brothers who don’t know what work and integrity mean. I hope you keep writing these articles and reminding my White Christian brothers that we did the right thing and we need to re elect Trump.’”

Granted, some white folks are going to vote for Trump again in spite of his racism. They tend to be plutocrats and other better-heeled Social Darwinist sorts who may cringe at the president’s public bigotry (but probably enjoy a racist joke in private). No matter, they cheer his policies, including big tax cuts for the wealthy, rolling back government regulations to safeguard consumers and the environment and protect the lives and limbs of workers on the job. They’re all in his support for anything that makes it harder on unions, too.

Anyway, Trump insists he’s not a racist. But that begs the question: If that’s true, why do so many racists think he’s one of them?

Not coincidentally, Trump’s base is almost all white. Tons of Trumpers dote on The Donald because of his racism–and his sexism, misogyny, nativism, xenophobia, homophobia and religious prejudice.

There are currently only two Jewish heads of state...
Read more
News of Africa