By Giuseppe Dentice and Tiziana Corda

We need to look beyond our immediate issues such as Eritrea, Somalia, and the problems of the two Sudans. Those [are] issues we can handle […]. We face two strategic adversaries. One[1] is Egypt.” To make sense of the relationship between Ethiopia and Egypt, Alex de Waal’s long conversations with Ethiopia’s late Prime Minister Meles Zenawi comes in handy. When asked about what his greatest fear was, in one of them Meles had no doubt that it was Egypt and its ambition for dominance in the region. Cairo has long attempted to covertly maintain Ethiopia in a weakened state, including by hosting and supporting Eritrea-based opposition movements in the days of the struggle for independence. “Addis Ababa always believed that there was an Egyptian hand behind every Eritrean rebel group”, as Martin Plaut so aptly put it. Cairo instilled fear and distrust in Ethiopia as much as Addis Ababa did in Egypt, and that is still true today, even if Meles and his TPLF are no longer in power. A too powerful Ethiopia was and would still be a problem for Egypt, first and foremost for its ability to control the Nile waterflow, which provides 97% of Egypt’s water supply, but also for regional influence in general . Abiy Ahmed’s rise to power in April 2018 did not help overcome the mistrust between the two rivals, despite his initial efforts in promoting a more collaborative attitude in Ethiopia’s regional diplomacy, Egypt included (one of his first visits abroad  after taking office was precisely to Cairo, in June 2018).

Currently, the Horn of Africa is being shaken by a new wave of instability triggered by the conflict in Ethiopia’s Tigray. Any reflections on the regional implications of this event cannot exclude the view from Cairo. Since November 4, when the Ethiopian army launched the offensive against the restive TPLF, pushing a pre-existing political crisis into a new military dimension, Egypt has actually remained silent. On November 18, Egyptian Foreign Minister Shoukry received his Eritrean counterpart Osman Saleh, while ten days later al-Sisi himself traveled to Juba to meet South Sudan’s president Salva Kiir. In both cases they discussed relations between their countries. Most likely, they also exchanged views on the Ethiopian crisis next door, although no public statements were issued in that regard. Unlike neighbouring states such as Eritrea, Somalia, and Sudan, Egypt is not directly affected by the Tigray conflict. Its interests in it are rather more circuitous, related to the implications this crisis has on the Ethiopian central government and its ability to exert power in the region.

Leaving aside Cairo’s Arab friends on the other side of the Red Sea, who may have a different view about this, any new or renewed source of instability that weakens and discredits the government of Ethiopia, such as this one in Tigray, is seen positively by Egypt. The longer the Tigray conflict goes on, the weaker Addis Ababa’s regional position will become. Should Abiy instead be able to defuse the crisis in a short time, its position could actually get even stronger, especially if he also succeeds in settling other major disputes in the country. Like many of them, the Tigray crisis is eventually a manifestation of Ethiopia’s broader political clash over the future of the state, which pitches ethno-federalists like the TPLF against Pan-Ethiopianists like Abiy’s Prosperity Party, and which would likely see Egypt wish for the former to prevail. Not that Cairo has ever had warm ties with these actors, but ethno-federalism with its current deficiencies and a constitutionally diffused authority among the diverse regional states may well prevent the establishment of a strong, centralized Ethiopia, at least more than what a solid Pan-Ethiopian alternative would do. Equally important for Egypt is the evolution of the developments taking place in the Western region of Benishangul-Gumuz, where the disputed Grand Ethiopian Renaissance Dam (GERD) is located. More than any other crisis hotspot in Ethiopia, an intensification of the ongoing instability there could clearly have a more direct impact on the dam, with more explicit repercussions on Ethiopia’s ability to challenge Egypt in the struggle for control of the Nile. 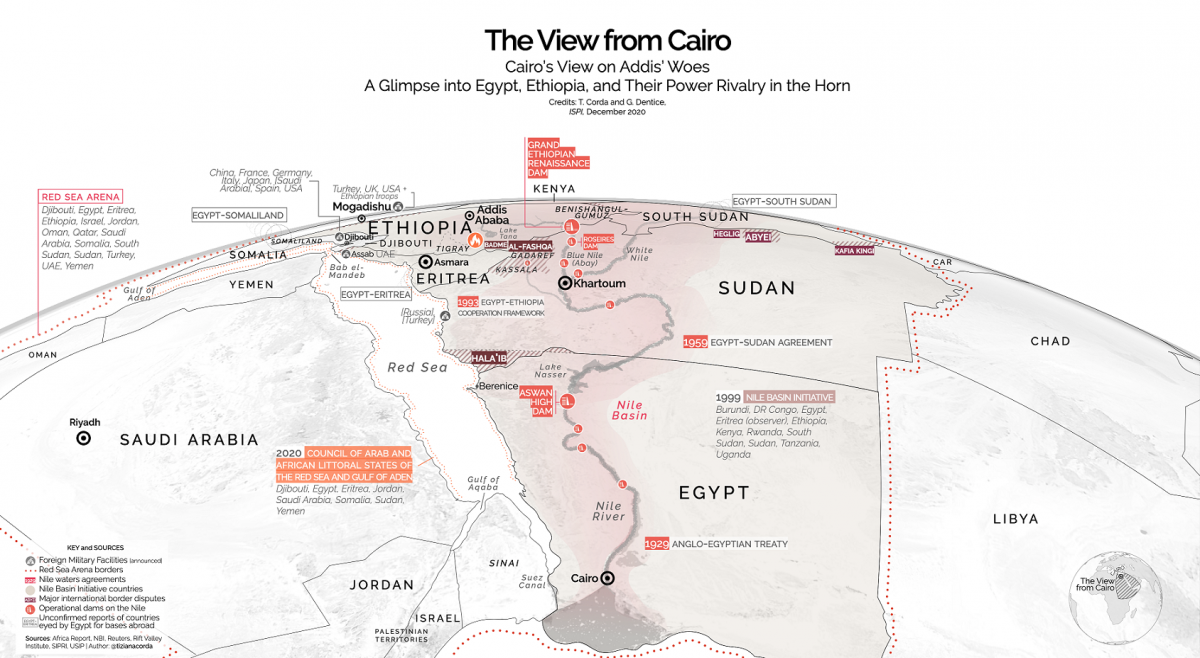 In this regard, the Tigray crisis in Ethiopia comes at a time when Egypt and Ethiopia were already facing major tensions, mostly related to the GERD dispute and the involvement of Gulf powers in the region. Two important issues for Egypt’s political and economic security, with significant repercussions both domestically and regionally. The Nile dispute is not only the main “existential” threat for Egypt’s national security — which could lead to growing domestic discontent as happened in May-June 2013, when President Mohamed Morsi was harshly criticized for  his ambiguous position on the Nile crisis —, but also a  big gamble for the future of the alliances in the wider arena encompassing the Eastern Mediterranean, the Red Sea, and the Horn of Africa. It is a game with multiple geopolitical implications, in which Cairo is trying to position itself as a reliable and unavoidable player.

Not surprisingly, then, Egypt’s foreign policy under president Abdel Fattah al-Sisi is a careful strategy that aims to maintain the existing balance domestically and to contain threats to the regional order, but at the same time with an approach aimed to aggressively diversify its foreign relations, also with traditional partners such as Saudi Arabiaand the UAE. Riyadh and Abu Dhabi have been the closest economic and security sponsors of al-Sisi since the counter-revolution in 2013. But the two Gulf monarchies maintain close economic relations with Addis Ababa too, which they do not want to damage by unilaterally taking sides with Egypt.

It’s clear that Cairo represents a junior partner in this triangular relation with Saudi Arabia and the UAE and also for all these reasons the partnership with them is fragile and unsustainable in the long term. In fact, Egypt’s new activism in the Eastern Mediterranean and the Red Sea allows it to achieve a partial independence from the Saudi-Emirati duopoly – more dominant and involved than Cairo in these areas – and set its own priorities both with regard to Yemen and to Red Sea security. Undoubtedly, this projection bolsters Cairo’s regional status and leverage, but Egyptian interests in this scenario eventually clash with the vision of other regional competitors – Turkey, Qatar, and Israel – that also have recently greatly expanded their geopolitical focus on the Red Sea and Horn of Africa and whose rising influence Cairo is forced to contain. Over the last decade, Ankara and Doha built a strong presence in Sudan and Ethiopia, countries which are in the midst of protracted negotiations with Egypt over the GERD. Exactly like Turkey, Egypt’s role in the Horn of Africa is aimed at reshaping its geopolitical posture, enhancing a political and military presence in the wider area. This means that Egypt aims to bolster itself as a relevant actor in the regional crises and conflict management.

That is why, therefore, Egypt will use all its available options and resources (political, economic and security-related) to isolate and pressure Ethiopia over the GERD, including by strengthening ties with the other countries in the region, and to contain extra-regional powers’ actions in this geopolitical space (partners’ and competitors’ alike). Secondly, Cairo will try to internationalize the debate over the Nile Dam in order to freeze the crisis and safeguard its interests, also with respect to external interference.

In case this strategy does not bring any effective results or, even worse, it backfires, a military intervention in the region is not among Cairo’s preferred options. A more aggressive geostrategic rivalry could indeed exacerbate national and regional tensions and trigger other conflicts, to the detriment of Cairo’s very own interests. But if multilateralism is the best response to stop the crisis in the region, controlled escalation could still help Egypt govern the growing regional instability and protect its multiple interests and assets in the broader Mediterranean and Red Sea arena. 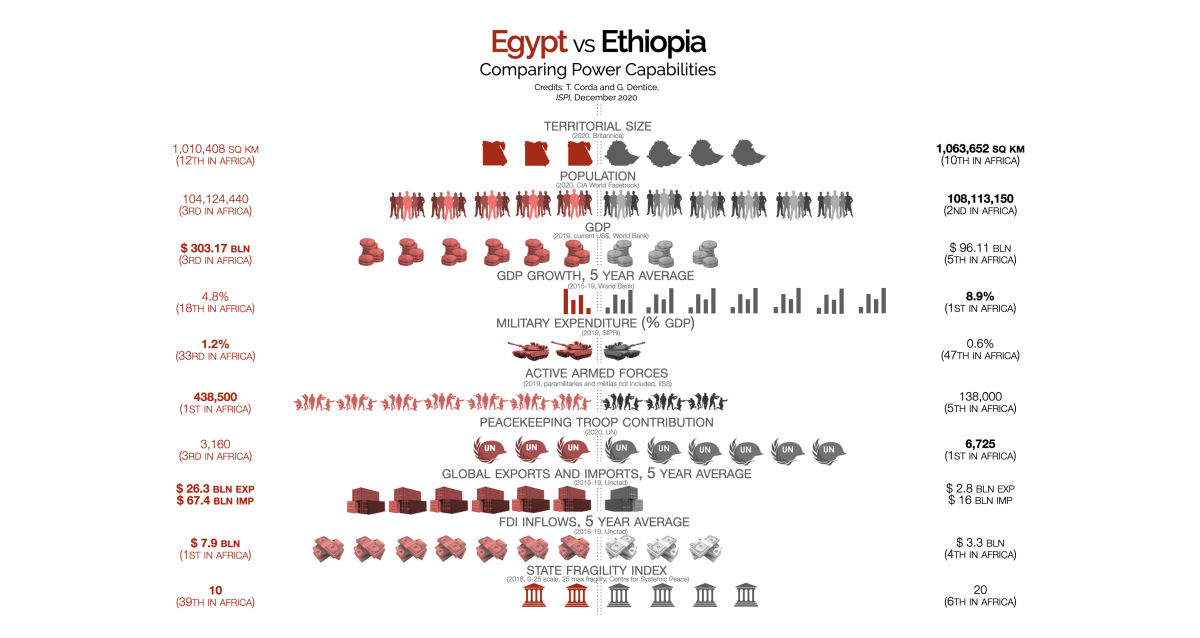 [1] Meles’ second strategic adversary was Saudi Arabia. A few years after the interview, with al-Sisi’s rise to power in Egypt, Cairo and Riyadh entered into an even closer economic and security partnership. A nightmare for Ethiopia, if it hadn’t been for Abiy’s new approach to regional diplomacy since 2018, which has entailed also closer economic relations with Saudi Arabia and other Gulf powers, creating concerns in Cairo.

Share
Facebook
Twitter
WhatsApp
Linkedin
Email
Previous articleThe Air and Missile War in Nagorno-Karabakh: Lessons for the Future of Strike and Defense
Next articleEthiopian children at refugee-run school in Sudan