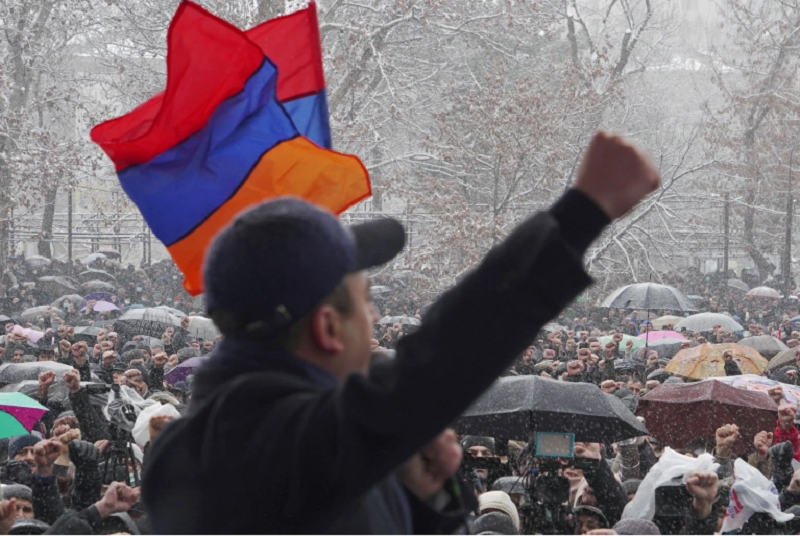 Armenia is in the midst of a heated political crisis after the General Staff called on Prime Minister Pashinyan to resign last week following the country’s disastrous loss in last year’s Nagorno-Karabakh War and the subsequent fury of many people who now blame the present government for that debacle.

Many observers are oversimplifying the heated political crisis in Armenia after the General Staff called on Prime Minister Pashinyan to resign last week. The prevailing narratives are that this is an unpopular coup attempt by rogue military elements or that it represents the culmination of a months-long popular uprising against a corrupt and quite possibly even traitorous government. The backdrop is that Armenia disastrously lost last year’s Nagorno-Karabakh War and many people now furiously blame the present government for that debacle. In response, the authorities have hinted that the military was actually responsible but that everyone should calm down and handle this crisis peacefully through democratic means in line with the country’s constitution instead of protesting in the streets like many have been since then. The reality, as usual, is somewhere in between these two extreme interpretations of events.

It’s true that Prime Minister Pashinyan must ultimately take responsibility for that disaster by virtue of his position as Armenia’s leader, but there’s also truth to his supporters’ claims that the military also failed in its mission to retain control of the UNSC-recognized occupied territories of Western Azerbaijan. For those who don’t remember the rapid sequence of events during that war, they’re encouraged to review the author’s following two pieces, the first of which chronologically lists his 36 analyses that were published about it at the time while the second suggests that lessons that should be learned from that debacle: “The End Of The Nagorno-Karabakh War: Retrospection, Clarification, And Forecast” & “Analytical Reflections: Learning From The Nagorno-Karabakh Fiasco”. At this point, Armenian society is deeply divided, but these partisan fault lines are made all the worse by some members of the country’s “deep state” recently exploiting them.

What’s meant by the aforementioned provocative term is its permanent military, intelligence, and diplomatic bureaucracies, which exist not only in Armenia but in every country in the world and have been present in society since the dawn of organized human history. This is veritably the driver of the latest events in the Armenian case as evidenced from the fact that the General Staff called on the country’s elected leader to resign, which represents the public intervention of the highest level of the “deep state’s” military faction into political affairs. That “deep state” fault line is exacerbated by the Armenian President refusing to fire the Chief of General Staff on the alleged basis that it’s “unconstitutional” despite Prime Minister Pashinyan’s request, thus prompting the premier to promise that he’ll resubmit it. Another layer of “deep state” discord was identified after the Armenian Defense Ministry released a statement condemning the military’s intervention.

All the while, people continue to protest in Yerevan and have even set up camp outside of parliament. For all intents and purposes, Armenia is in the throes of a Color Revolution, though it’s not clear whether foreign forces are involved like during the one that ironically swept Prime Minister Pashinyan into power. About that, he started off as a pro-American Soros-backed asset in Armenia but seems to have reconsidered the wisdom of being their puppet after having lost the last Nagorno-Karabakh War, with the Armenian military only being saved from total destruction by Russia’s last-minute diplomatic intervention to mediate an emergency ceasefire which thankfully still officially holds to this day. Even so, he’s earned himself the wrath of many patriotic Armenians and foreign-backed ones alike for various reasons over the years, thus proving that the popular outrage against his government is very real and palpable.

That arguably being the case, it’s unclear whether the majority of the population is truly against him or not, and if they are, whether a sizeable number of them are willing to resort to illegal acts such as violence in order to overthrow him. It’s not just average Armenians that are incredibly angry with him, but also the General Staff, hence their intervention into the country’s political affairs. Among the military faction of the “deep state”, however, there’s obviously a divide between those who support their regime change demands and those who believe that the issue should be politically decided by the people at the polls. It’s unclear where the Armenian President stands amidst all of this considering his refusal to fire the Chief of General Staff on the basis that the request was supposedly “unconstitutional”. He might be trying to do everything “by the book”, or just creating problems for the premier out of secret sympathy with the military. As the situation continues to boil, there’s a possibility of street clashes occurring which might prompt the military to intervene to “re-establish order”.

While all of this is happening, it must be emphasized that Russia is unlikely to interfere since it doesn’t meddle in what it officially considers to be its mutual defense ally’s “internal affair”. The author elaborated on this policy in his analysis from last week about “What Explains Putin’s Pragmatic Approach To Armenia’s Political Crisis”. It’s argued that Russia’s only interest is ensuring that Armenia continues to abide by last November’s Moscow-mediated ceasefire no matter the outcome of its current crisis. The Russian government has lent legitimacy to its Armenian counterpart by speaking to its representatives since the crisis began, but it won’t take any action to ensure their political survival if the military overthrows them. Moscow might be working behind the scenes to facilitate an amicable resolution to this crisis, but it won’t impose any meaningful pressure on either of the involved parties to promote its desired outcome of a strictly legal regime change.

Are Snap Elections A Realistic Solution?

Regarding that possibility, it can’t be discounted that a compromise solution might be to hold snap elections even though Prime Minister Pashinyan recently dismissed that option despite having previously supported it. Even in that scenario, though, it’s difficult to predict whether the process will truly be free, fair, and transparent since the country’s endemic corruption might result in a manipulated outcome which might in turn provoke even worse tensions in the street. Going to the polls is the only legal and therefore legitimate way to resolve this crisis, however, since Prime Minister Pashinyan’s resignation in response to the General Staff’s demand or his forcible ouster in the worst-case scenario would only destabilize this already chronically unstable country even more. The underlying problem is that Armenia’s “deep state” is deeply divided, which prevents the state from reacting in a unified way that could have otherwise stabilized the situation.

These divisive “deep state” dynamics are ultimately responsible for the crisis reaching its breaking point, and it seems unlikely that they’ll improve anytime soon. Armenia’s disastrous loss in last year’s Nagorno-Karabakh War was too traumatic for many of its people, who had been indoctrinated for years and even during the midst of the conflict itself into thinking that their side retained military superiority at all moments. They were obviously lied to be a combination of self-interested, manipulative, and wishful thinking individuals, which made their loss all the more shocking since they had hitherto trusted their sources of information about this. Everyone is now looking for someone to blame instead of realizing that there wouldn’t have even been a crisis in the first place had Armenia simply complied with the four UNSC Resolutions from 1993 calling on it to withdraw from the occupied territory of Western Azerbaijan.

In any case, there’s no turning back time and talking about “coulda”, “woulda”, “shoulda”, since what’s done is done, and the Armenian military lost control of Western Azerbaijan after nearly three decades of illegally occupying it. The state’s political identity is now at stake since that occupied territory was considered by many Armenians to de facto be a part of their own country, so losing it amounts in their hearts and minds to losing a piece of Armenia itself. Under such challenging psychological circumstances, it’s very difficult to imagine Prime Minister Pashinyan winning re-election, but even so, his political future must be up to the people to peacefully decide at the polls whenever that moment arrives. It shouldn’t be decided in the streets even though that’s ironically how he himself came to power, nor by the military, otherwise Armenia’s possible regime change wouldn’t be truly legitimate. Without international recognition, the country will only become more isolated.

The bad policy of the Somali President @HassanSMohamud has...
Read more
Democratization

How Electronic Voting Machines Cheat and What to Do About This

Algorithms 101: Why the Secret Ballot -- In Made-for-Cheating...
Read more
News of Africa

Foreign powers have hailed the truce signed by the...
Read more