Local pilots are flying Su-24 supersonic strike aircraft on behalf of the Libyan National Army (LNA) faction, it was claimed on 30 May. 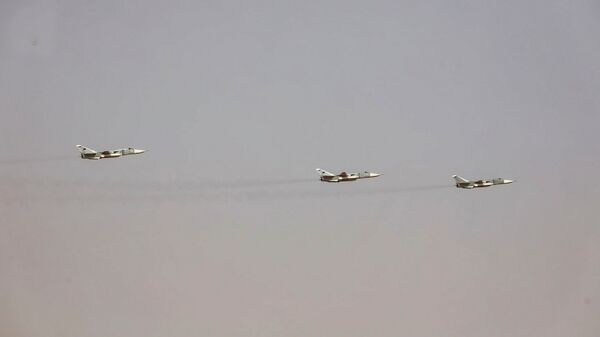 Three Su-24 strike aircraft featured in the LNA parade on 30 May. It is unclear if they were actually flown by Libyans. (Libyan National Army)

A video was released showing five pilots (three brigadiers and two colonels) as well as several ground crew with an Su-24 at a location that was probably Al-Khadim airfield in eastern Libya. Two were seen in the cockpit of the jet, which subsequently taxied down the runway.

Satellite imagery showed four Su-24s at Al-Khadim in May 2020, when US Africa Command noted that at least 14 unmarked fourth-generation combat aircraft that included MiG-29s and Su-24s had arrived in eastern Libya from Russia via the Russian airbase in Syria. The MiG-29s are based at Al-Jufrah Air Base further to the west.

It was previously widely presumed the aircraft would be flown by Russian personnel in support of the LNA to deter further eastwards advances by Turkish-backed government forces. All foreign military personnel should have withdrawn under the terms of the current ceasefire agreement, although there is no sign that this has happened.

The Libyan Air Force operated Su-24s before the 2011 war so it is possible the LNA has recruited veteran personnel.

The video was released to coincide with a major LNA parade to mark the anniversary of Operation ‘Dignity’: a campaign it waged against Islamist militants in eastern Libya and one of the reasons it attracted international support for its subsequent failed attempt to take control of all the country. The parade was held at Benina Air Base outside Benghazi.

Scientific advances are not always linear; they zigzag in...
Read more
News By Country

AIPAC, CPAC, and Autocrats, Oh My!

How AIPAC went from Lobbying for Israel to quashing...
Read more
News of Africa

54 Billion for Ukraine While in the U.S. Millions Suffer in Poverty