(ZH) As Ed Snowden warned in a tweet when the story broke this weekend, “this leak is going to be the story of the year.”

Southfront reports that an Israeli company’s spyware was used in attempted and successful hacks of 37 smartphones belonging to journalists, government officials and human rights activists around the world, according to an investigation by 17 media organizations, published on July 18th.

One of the organizations, The Washington Post, said the Pegasus spyware licensed by Israel-based NSO Group also was used to target phones belonging to two women close to Jamal Khashoggi, a Post columnist murdered at a Saudi consulate in Turkey in 2018.

One of them was his fiancee, and she and the other woman were targeted both before and after his death.

The Guardian, another of the media outlets, said the investigation suggested “widespread and continuing abuse” of NSO’s hacking software, described as malware that infects smartphones to enable the extraction of messages, photos and emails; record calls; and secretly activate microphones.

The investigation highlights widespread and continuing abuse of NSO’s hacking spyware called ‘Pegasus’ which the company confirms is only intended for use against terrorist groups, drug and human traffickers, and criminals.

Pegasus is a very advanced malware that infects iOS and Android devices to allow operators of the spyware to copy messages, photos, calls and other data, including secretly activate microphones and cameras.

Based on the investigation, the leak contains a list of 50,000 phone numbers that have been identified as those of people of interest by clients of NSO since 2016.

The list includes many close family members of one country’s ruler, suggesting he might have instructed the country’s intelligence agencies to explore the possibility of tracking and spying on their own relatives.

The company, NSO Group, issued a statement on its website denying the reporting by the 17 media partners led by the Paris-based journalism nonprofit Forbidden Stories.

“The report by Forbidden Stories is full of wrong assumptions and uncorroborated theories that raise serious doubts about the reliability and interests of the sources. It seems like the ‘unidentified sources’ have supplied information that has no factual basis and are far from reality,” the company said in the statement.

“After checking their claims, we firmly deny the false allegations made in their report,” the statement said. NSO said its technology was not associated in any way with Khashoggi’s murder.

In a statement, rights group Amnesty International condemning “the wholesale lack of regulation” of surveillance software.

“Until this company (NSO) and the industry as a whole can show it is capable of respecting human rights, there must be an immediate moratorium on the export, sale, transfer and use of surveillance technology,” the rights group said in a statement.

The targeted phone numbers were on a list provided by Forbidden Stories and Amnesty International to the 17 media organizations. It was not clear how the groups obtained the list.

The numbers on the list were not attributed, but reporters identified more than 1,000 people spanning more than 50 countries.

“We are deeply troubled to learn that two AP journalists, along with journalists from many news organizations, are among those who may have been targeted by Pegasus spyware,” said Director of AP Media Relations Lauren Easton.

“We have taken steps to ensure the security of our journalists’ devices and are investigating,” she added.

Reuters’ spokesman Dave Moran said, “Journalists must be allowed to report the news in the public interest without fear of harassment or harm, wherever they are. We are aware of the report and are looking into the matter.”

The map below provides insight into how many “customers” NSO Group had that were feeding numbers. 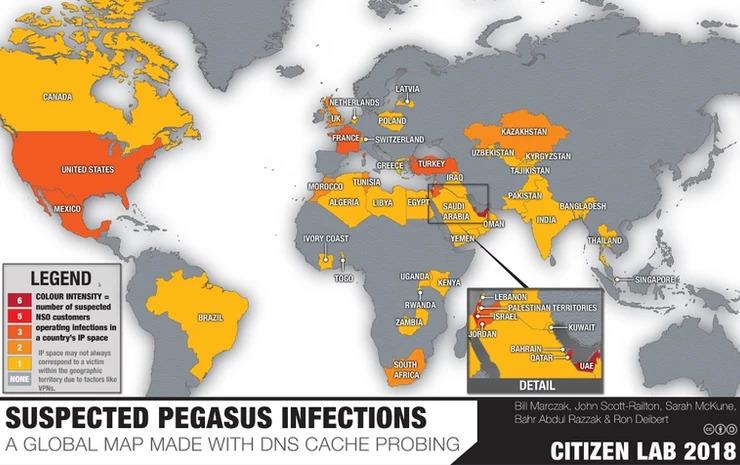 + posts
Share
Facebook
Twitter
WhatsApp
Linkedin
Email
Previous articleEgypt/Ethiopia/Sudan: Could the US be the key to unlocking the GERD deadlock?
Next articleTurkish Red Crescent donates meat to South Sudan needy for Muslim holiday

Scientific advances are not always linear; they zigzag in...
Read more
News By Country

AIPAC, CPAC, and Autocrats, Oh My!

How AIPAC went from Lobbying for Israel to quashing...
Read more
North America

54 Billion for Ukraine While in the U.S. Millions Suffer in Poverty

Russian-Ethiopian Relations Are The Perfect Model Of Multipolar Partnership

These civilization-states have always had leading roles in their...
Read more