Relations between the US and Russia are at an all-time low, but rather than seeking a reasonable diplomatic resolution, US Secretary of State Antony Blinken seems comfortable uttering nonsensical assessments devoid of reality.

“One lesson of recent history is that once Russians are in your house, it’s sometimes very difficult to get them to leave.”

The level of hubris-laced ignorance it would take an ostensibly intelligent, well-informed individual to make such a statement, in public, in an official capacity, goes beyond political parody.

And yet, there was the American Secretary of State, Tony Blinken, uttering those words at the tail end of a press statement where he questioned the legitimacy of Russia’s dispatch of military forces to Kazakhstan. The Russian actions took place in the wake of widespread violence that prompted the Kazakh President to request help from the Collective Security Treaty Organization (CSTO), which Russia leads.

It should be noted that Russia was invited to send troops to Kazakhstan. Russia was also invited to send troops to Syria. As Blinken was speaking, the US had between 900 and 1,200 troops inside Syria, none of whom were there at the request of the Syrian government. Likewise, the US continues to maintain a force of some 2,500 troops in Iraq, even though the Iraqi parliament has called for their withdrawal for more than a year. 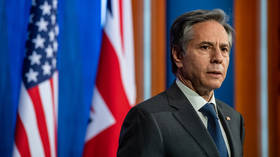 When it comes to understanding what an “unwanted houseguest” looks and acts like, Tony Blinken need only look in the mirror for the perfect illustration.

While the issue of Russo-Georgian relations is a difficult one, dating to before the dissolution of the Soviet Union, it is an undisputed fact – indeed, one backed up the European Union’s inquiry into the incident – that the 2008 conflict was triggered by a Georgian military incursion into South Ossetia, including an unprovoked attack on Russian peacekeeping forces stationed there. Subsequent Russian actions are attributable to Georgian aggression.

Likewise, Russia’s actions vis-à-vis Crimea and the Donbass region, where Moscow supports  ethnically Russian separatists, all derive from the so-called ‘Maidan Revolution’, a US and EU-backed insurrection that overthrew Viktor Yanukovich, the duly elected president of Ukraine, and replaced him with a more Washington-friendly government.

And, lastly, the Russian intervention in Syria came at the request of the legitimate government in Damascus, which was under siege from foreign-funded and trained terrorists and insurrectionists. Russia’s actions were decisive, helping shift the military balance in favor of the Syrian government, and leading to the defeat of most of the anti-government fighters. The irony behind the Russian intervention is that it exposed the hypocrisy of the US, in so far as several of the terrorist groups Russia helped defeat were not only affiliates of Al-Qaeda but were also being funded by the US and its allies.

The US presence in Iraq and Syria, however, is the direct consequence of the illegal US-led invasion and occupation of Iraq in 2003. Between the US and Russia, only one nation has violated international law when it comes to disregarding the sovereignty of others – and it is not Russia.

Tony Blinken did not limit his Russo-phobic commentary simply to the issue of unwanted houseguests. When asked during an interview on a Sunday morning talk show on January 9 whether he agreed that Russian President Vladimir Putin was seeking to restore the Soviet Union, Blinken answered: “I think that’s right… I think that’s one of President Putin’s objectives, and it is to re-exert a sphere of influence over countries that previously were part of the Soviet Union,” something, Blinken added, was “unacceptable.” 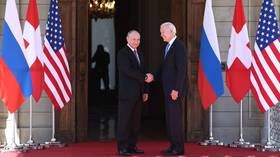 Claims US policy in Europe involves ‘appeasement’ of Russia are ludicrous

First and foremost, as Russia has been making clear during its ongoing European security framework discussions with the US, NATO, and the OSCE this week, the issue of what is or isn’t acceptable when it comes to defining the scope and scale of Russian national security and related spheres of interest, is not something Moscow is willing to subordinate to Washington or its allies. Rather, it is a matter for Russia alone to decide.

It is the US, not Russia, which is seeking to continuously breathe life into the Cold War relic that is the NATO alliance. The history of broken American promises when it comes to the issue of NATO expansion –“not one inch east” has a different meaning in Brussels than anywhere else, it seems.

The ostensibly “defensive” NATO alliance has been, since the end of the Cold War, used for almost exclusively offensive military action, much of which has taken place outside the geographic boundaries defined by the treaty. Whether it be intervention in the former Yugoslavia, the dismemberment of Serbia, intervention in Libya, supporting the US invasions of Iraq and Afghanistan, or sustaining the illegal presence of US forces in Syria, NATO has made itself an unwanted houseguest across the globe.

Truth be told, if it were not for NATO actively seeking to attract both Georgia and Ukraine to its roster, the events of 2008 and 2014 might have unfolded completely differently.

Tony Blinken’s comments about the suitability of Russia as a houseguest are as fact-free as any made by senior international statesmen in modern times. The reality is the US is the unwanted houseguest, habitually overstaying its welcome, sowing chaos, death, and destruction in its path.

Using this analogy, Russia could be seen as the emergency clean-up crew tasked with trying to clean up the mess that accrues in the wake of America’s foreign policy tornado. Tony Blinken and his boss, President Joe Biden, seem to have difficulty focusing on the real consequences of their words and deeds, as their gaze is constantly fixed on an artificial horizon that only they can see.

Unfortunately for Washington, the rest of the world knows the truth, and who is to blame for what. Blinken can continue uttering nonsense about Russia but, from such ignorance, does not sound policy come. This should be a lesson for any nation, especially those in Europe, who are looking to the US for sound guidance and leadership when it comes to solving the world’s problems.

Your 30-day free trial features all the benefits of...
Read more
North America

Explain It to Me, Please

If you want a war with Iran, Russia, China...
Read more
North America

The US-China rivalry in South Pacific just got more heated