Abby Martin’s interview with Peter Phillips was the instigator for reading Peter Phillips’ now slightly outdated but highly valuable work, “Giants – The Global Power Elite.” The interview is valuable unto itself and like all Abby Martin’s work is concise and pointed; it is a good place to start before reading the actual book.

“Giants” is an examination of the few people within the global transnational capitalist class [TNC] where eight people (as of publication) have half the wealth and the top one percent have ninety per cent of the wealth. The seventeen largest investment giants, consisting of 199 people (remember, at publication) controlled 41 trillion dollars, 50 trillion at the time of the interview, and who knows how much more now after all the injections of money in order to sustain the Covid economy. 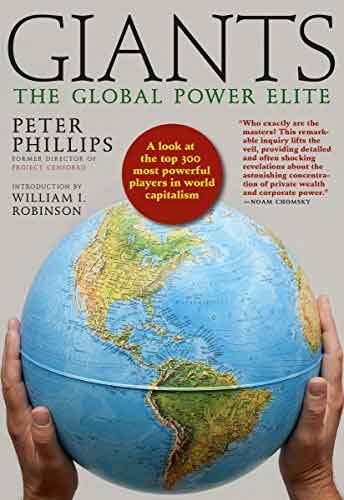 The most significant NGO supporting all this is the Atlantic Council, a group of security and investment advisors who pushed out policy press releases followed by the corporate media putting it out as news, which is then picked up by other media, the CIA, and it becomes a circular reinforcement mechanism. There is a “massive penetration into media” of which 80 percent is pre-packaged by public relations firms. It is all weaponized for empire.

The Council on Foreign Relations is a governmental advisory board with “a long history of US expansionism, with the goal of solidifying the United States’s [sic] global hegemonic power” while paying “close attention to international financial policies.”

This financial empire has its protectors. NATO, the U.S. military, and many private security firms work around the world to service the TNC. “Giants” points out G4S as a major mercenary/security firm working in many areas including protection of Israeli settlements, prisons, and mercenary roles globally. In 2021 it was bought out by Allied Services, continuing the same roles, with 800 000 employees, the largest private firm in the world.

Beyond that it becomes simply the role of the U.S. military in all its parameters to keep the world ‘safe’ for the financial actions of the TNC: “The US military empire has long been the protector of global capitalism….permanent war as an economic relief valve for surplus capital is a vital part of comprehending capitalism in the world today.”

More than just war, “Failed states, manufactured civil wars, regime changes, and direct invasions/occupations are manifestations of the new world order requirements for protecting transnational capital.” The result is that the “private wealth is being used for the economic colonization and privatization of the public commons in complete disregard for human rights.” Yet arguably, an equal amount of public wealth is used to support the TNC with huge influxes of government money for direct purchases of equipment and services as well as simply to support companies that would otherwise be bankrupt.

Phillips’ research is extensive, and while Abby Martin’s video serves as an excellent summary, for the reader wanting the details – and this is where the book comes to the fore – there are numerous listings and cross listings of the people involved and their business and government relationships.

Unfortunately, a very short “Letter to the Global Power Elite” puts a rather nasty twist on the topic. The letter starts with a two paragraph laudatory honorific tribute to the TNC ending by saying, “you…the financial and policy core of global capitalism…have the power…to save the world from deadly inequality and pending economic or environmental chaos.” Were they being sarcastic in their congratulatory introduction?

This is the group that needs to be deconstructed, to be made powerless, if there is to be a reworking of the global environment in all its aspects: political, financial, environmental, andsocial with an elimination of a militarized corporate world. It is the very fear of this group that the US$ will collapse and their power will be lost, as it must for the world to have a chance to recover from its inequities.

Jim Miles is a Canadian educator

In their less-guarded moments, even the worst empire managers know deep down what is true and let it slip...
Read more

The Biden administration has ordered the redeployment of 450...
Read more

The Biden administration has ordered the redeployment of 450...
Read more
North America

In their less-guarded moments, even the worst empire managers...
Read more
North America

The Biden administration has ordered the redeployment of 450 US soldiers to Somalia at...
Read more

In their less-guarded moments, even the worst empire managers know deep down what is...
Read more