Labour leader Sir Keir Starmer has reaffirmed his party’s unswerving commitment to NATO and its warmongering against Russia, and his readiness to lead a crackdown on popular anti-war sentiment.

In an interview with the Times yesterday he said, “This is very clearly me reasserting our position on Nato, and intentionally so. It isn’t a new position for the Labour Party because we have always been the party of Nato. 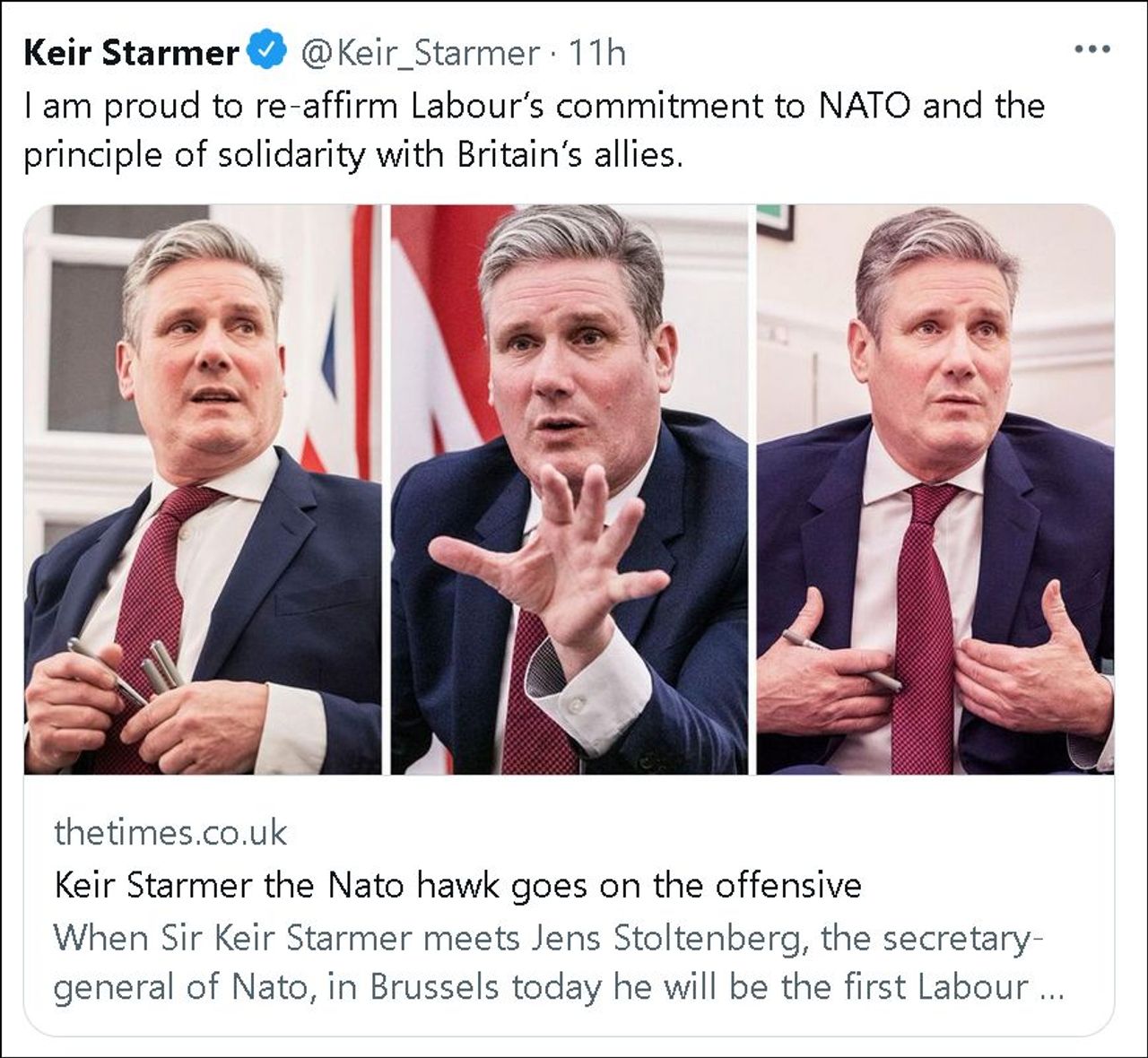 Ernest Bevin, the Times points out, was a former “Labour foreign secretary and staunch anti-communist whose vision of a transatlantic alliance led to Nato.”

The Labour leader continued by explaining that it was “very difficult to find a dividing point” between the Conservative government and Labour over the US-led war drive centred on Ukraine. Making clear that he was speaking of aggression up to and including military conflict, he explained that he was “not hopeful a crisis on Ukraine’s border can be averted” and would “reverse the government’s plans to axe 9,000 soldiers and 79 tanks from the army after a ‘decade of decline’ in the armed forces.”

Starmer gave the interview ahead of a meeting with NATO Secretary-General Jens Stoltenberg yesterday, the first such meeting with a Labour leader in a decade, as part of his audition before British imperialism—showing that Labour can be trusted with carrying out the militarist policies of the ruling class.

He condemned his predecessor Jeremy Corbyn’s faux opposition to NATO and hesitation in signing up to the anti-Russian campaign over the Skripal poisonings. The Times summarised Starmer as saying Corbyn was “wrong on Nato and emphatically wrong on the Salisbury poisonings for refusing to hold Russia responsible.”

The Times welcomed the Labour leader’s words with an editorial “Starmer and Security: A message of strength is a welcome shift in the party’s stance.” But it claimed Starmer had “erred” by saying Labour has “always been the party of NATO”, raising Corbyn’s leadership and planned attendance that evening at a Stop the War Coalition rally, “No War in Ukraine: Stop Nato Expansion”.

Its editors commanded, “Sir Keir says the party has abandoned his predecessor’s approach. That commitment must stick.”

Starmer responded within hours, penning an opinion piece in the Guardian newspaper reported as “penned on the way to Brussels where he reaffirmed Labour’s staunch support for Nato.”

“Under my leadership, Labour’s commitment to Nato is unshakable”, he wrote, denouncing “the likes of the Stop the War coalition” as being “at best… naïve; at worst they actively give succour to authoritarian leaders who directly threaten democracies.”

To quote former Tory Prime Minister Margaret Thatcher, Starmer is using the STWC as a stalking horse to attack all those opposed to war as “the enemy within”. He is signalling Labour’s willingness to play the leading role in a ruthless suppression of any opposition in the working class to NATO’s war plans.

This is the most critical element of his pitch to prove himself a safe pair of hands for British imperialist interests. The second element is to advance himself as a more globally and domestically credible alternative to Johnson’s shambolic premiership. “I’m struck by the fact that almost every time he does a press conference abroad among the first questions are about his authority in his own country, his authority on the world stage,” Starmer told the Times.

“That should never be the first question of a British prime minister of any political party.”

His point was underscored yesterday during a joint press conference between Johnson and Stoltenberg in Brussels. The prime minister repeated baseless claims of “grim” intelligence proving an imminent Russian invasion, following an announcement that an additional 1,000 British troops were being placed on standby for rapid deployment to Eastern Europe.

He continued his lambasting of the European Union powers on behalf of the US government, with a jibe against French President Emmanuel Macron, who the British press have accused of “offering Ukraine a poisoned peace plan” following his talks with Putin. The UK was “not going to treat the nations at the heart of our Continent as pawns on a chessboard, to be haggled over or sacrificed,” Johnson fulminated.

But his attempt at statesmanlike authority was swiftly undermined by the question, “If you’re found to have broken the law, would you resign?” This was in reference to the ongoing police investigation into parties held at Downing Street, some attended by the prime minister, during national pandemic lockdowns.

As Johnson squirmed, Foreign Secretary Liz Truss was being treated with undisguised contempt by Russian Minister of Foreign Affairs Sergey Lavrov at a press conference in Moscow. He bluntly described the conversation as one “between the dumb and the deaf” and his counterpart as someone “off of which bounced all the facts we presented”. At one point he told his translators to stop interpreting Truss and walked off as soon as the press conference was over.

In contrast to Johnson, Starmer offers himself up as someone reliable enough to have been trusted by the British state to run the Crown Prosecution Service for five years, including in his own words, “working on live operations with the security intelligence services.”

Starmer’s appeal is to the bourgeoisie, through the medium of the most unalloyed representatives of the Conservative Party. His first major statement on Ukraine was delivered as an opinion piece written for the house paper of the Tory right, the Daily Telegraph, “Britain must stand firm against Russian aggression”. His second public declaration was delivered first to the Times, one of the flagship publications of the Murdoch press.

Starmer again made clear that his was an appeal for national unity and not discord. He singled out Johnson’s main competitors for leadership of the Tory Party for praise, describing himself as “heartened” by the “moral courage” of Chancellor Rishi Sunak and Health Secretary Sajid Javid for criticising Johnson for accusing Starmer of allowing the notorious paedophile Jimmy Savile to escape prosecution.

Sunak, a multi-millionaire, is leading the calls for devastating austerity to be imposed on the working class to repay the bailouts of the corporations and the super-rich during the pandemic. Javid, a lowly millionaire, has spearheaded the government’s scrapping of all COVID-19 public health measures.

Starmer is making clear that Labour will continue backing these policies, along with warmongering against Russia, to the hilt, whether as a loyal opposition, a partner in a government of national unity, or by forming its own government.

His actions are a devastating indictment of Corbyn and Labour’s “left” rump. What is to show for their five years in charge of the party? His refusal to fight the Blairites has left behind a party even further to the right than it was under Tony Blair, unconditionally united with the Tories on all its major policies, including fomenting a war with nuclear-armed Russia and describing anti-war protestors as agents of foreign despots.

As the Socialist Equality Party insisted in its statement, The working class must mobilise to bring down the Johnson government: “Workers must face up to the political reality that the Tory and Labour Parties represent a single entity—the party of herd-immunity, social reaction, militarism and war.”

The urgent task of building an anti-war movement to combat the aggression of British and US imperialism can only be done on the foundation of a new, socialist, internationalist movement in the working class under the leadership of the SEP.

In their less-guarded moments, even the worst empire managers know deep down what is true and let it slip...
Read more

The Biden administration has ordered the redeployment of 450...
Read more

In their less-guarded moments, even the worst empire managers...
Read more

Putin’s Liberalism Means a Wider War Is In the Cards

The NATO to TikTok Pipeline: Why is TikTok Employing So Many National Security Agents?

The Biden administration has ordered the redeployment of 450 US soldiers to Somalia at...
Read more

In their less-guarded moments, even the worst empire managers know deep down what is...
Read more