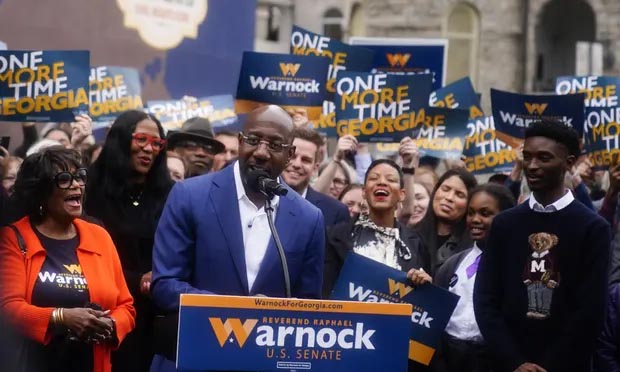 Two years ago, Georgia was the state that decided control of the Senate in Democrats’ favor. This year, its importance will be slightly diminished – but that doesn’t mean the results of Tuesday’s run-off election between Democratic senator Raphael Warnock and Republican Herschel Walker won’t be closely watched.

Democrats won enough seats in last month’s midterm elections to control Congress’s upper chamber for another two years, but only by a margin so slim they’ll need vice-president Kamala Harris to cast tie-breaking votes on legislation Republicans don’t support. But if Warnock wins, the Democrats will control the chamber outright, and the influence of senators like Joe Manchin and Kyrsten Sinema, who repeatedly acted as spoilers for some of Joe Biden’s policy proposals over the past two years, will be lessened.

A victory by Walker will put Republicans one seat away from retaking control of the chamber, and perhaps mark the unofficial start of the campaign to do so in 2024. In that election, Democrats will be defending Senate seats in a number of states that typically vote Republican, such as Montana, Ohio and West Virginia. They would only need to lose one for the GOP to return to the majority.

Democratic senator Raphael Warnock and his Republican challenger Herschel Walker are in the home stretch of campaigning ahead of Tuesday’s run-off election for Georgia’s Senate seat. Polls indicate Warnock has the edge, while the weather may undercut Walker’s hopes that Republican voters will turn out massively for him tomorrow. Meanwhile, in New York, jurors are deliberating in the tax fraud trial of Donald Trump’s business.

Here’s what else happened today:

Anyone who’s flown through an American airport recently has probably seen signs encouraging them to make sure their drivers license or identification card is compliant with the REAL ID Act.

Passed in 2005 on the recommendation of the 9/11 commission, the law’s implementation has repeatedly been delayed, and the homeland security department today announced its effective date has been pushed back again, from 3 May, 2023 to 7 May, 2025 :

The department cited the impact of the Covid-19 pandemic as the latest hold up. States typically require applicants to present more stringent proofs of identity such as passports in order to obtain a REAL ID-compliant drivers license or identification card.

Once the 2025 deadline passes, such documentation will be necessary to get through Transportation Security Administration checkpoints at airports, as well as to access other federal agencies, the homeland security department says.

It appears the supreme court’s conservative majority is siding with a Christian graphic artist in a dispute over Colorado’s anti-discrimination law, the Associated Press reports.

The justices are weighing whether the artist broke Colorado’s law by refusing to design a wedding website for a same-sex couple. While the court’s arguments are notoriously opaque, the balance of power is currently 6-3 in favor of the conservatives, and the AP says comments by Republican-appointed justices indicate they’re in favor of the artist.

Here’s more from their story:

Justice Neil Gorsuch, one of three high court appointees of former President Donald Trump, described Lorie Smith, the website designer in the case, as “an individual who says she will sell and does sell to everyone, all manner of websites, (but) that she won’t sell a website that requires her to express a view about marriage that she finds offensive.”

Where to draw the line for what a business might do without violating state anti-discrimination laws was a big question in Monday’s arguments at the high court.

Justice Ketanji Brown Jackson asked whether a photography store in a shopping mall could refuse to take pictures of Black people on Santa’s lap.

“Their policy is that only white children can be photographed with Santa in this way, because that’s how they view the scenes with Santa that they’re trying to depict,” Jackson said.

But Justice Samuel Alito, who seemed to favor Smith, asked whether it’s “fair to equate opposition to same-sex marriage to opposition to interracial marriage?”

Things got a little awkward today during the supreme court’s arguments in a case pitting a Christian graphic artist against Colorado’s anti-discrimination law.

The justices are considering whether the graphic designer has the right to turn down designing a website for a same-sex couple, or whether the state’s law compels her to do so. As justices heard both sides in the case, they pondered how the law would handle hypothetical situations, and conservative justice Samuel Alito generated a few chuckles in the courtroom – and many raised eyebrows outside of it – with a quip about Black children and the Ku Klux Klan:

Alito, who was the author of this summer’s decision overturning Roe v Wade, also seemed to imply liberal justice Elana Kagan would know something about AshleyMadison.com – a dating site specializing in infidelity:

Manhattan district attorney Alvin Bragg is conducting one of the many investigations into Donald Trump’s conduct, and the New York Times reports he’s brought on to his team an attorney with a history of tangling with the former president.

As the Times reports, Colangelo challenged the Trump administration repeatedly during his time in the New York attorney general’s office:

Mr. Bragg and Mr. Colangelo overlapped while working at the New York attorney general’s office, where Mr. Bragg rose to become chief deputy attorney general and Mr. Colangelo was chief counsel for federal initiatives. In that role, Mr. Colangelo led dozens of lawsuits against the Trump administration, including a successful challenge to the inclusion of a question about citizenship to the census in 2020. He also oversaw an investigation into Mr. Trump’s charity, the Trump Foundation, that caused the organization to dissolve, and led that office’s civil inquiry into Mr. Trump’s financial practices.

That inquiry led to a September lawsuit from the attorney general, Letitia James, that accused the president of overvaluing his assets by billions of dollars.

By then, Mr. Colangelo was working at the Department of Justice, having been appointed as acting associate attorney general when President Biden took office. In that job, the third highest-ranking at the department, Mr. Colangelo helped oversee the Civil, Civil Rights, Antitrust and Tax divisions, among others.

Donald Trump has reemerged on his Truth social network to refute that he ever called for the “termination” of the constitution – even though he definitely did.

“The Fake News is actually trying to convince the American People that I said I wanted to ‘terminate’ the Constitution. This is simply more DISINFORMATION & LIES, just like RUSSIA, RUSSIA, RUSSIA, and all of their other HOAXES & SCAMS”, the ex-president wrote.

But scroll a little further down his profile, and the “termination” comment sure doesn’t seem like disinformation or lies. Here’s what he wrote on Saturday, in the post that kicked off the latest firestorm: “So, with the revelation of MASSIVE & WIDESPREAD FRAUD & DECEPTION in working closely with Big Tech Companies, the DNC, & the Democrat Party, do you throw the Presidential Election Results of 2020 OUT and declare the RIGHTFUL WINNER, or do you have a NEW ELECTION? A Massive Fraud of this type and magnitude allows for the termination of all rules, regulations, and articles, even those found in the Constitution.”

In today’s posts, he doubles down on his insistence that the 2020 election was stolen, even though there’s been no proof of that, despite repeated attempts by Trump’s lawyers to convince judges nationwide otherwise.

“What I said was that when there is ‘MASSIVE & WIDESPREAD FRAUD & DECEPTION,’ as has been irrefutably proven in the 2020 Presidential Election, steps must be immediately taken to RIGHT THE WRONG”, Trump wrote.

He followed that up with a second post: “SIMPLY PUT, IF AN ELECTION IS IRREFUTABLY FRAUDULENT, IT SHOULD GO TO THE RIGHTFUL WINNER OR, AT A MINIMUM, BE REDONE. WHERE OPEN AND BLATANT FRAUD IS INVOLVED, THERE SHOULD BE NO TIME LIMIT FOR CHANGE!”

Democratic senator Raphael Warnock and his Republican challenger Herschel Walker are in the home stretch of campaigning ahead of Tuesday’s run-off election for Georgia’s Senate seat. Polls indicate Warnock has the edge, while the weather may undercut Walker’s hopes that Republican voters will turn out massively for him tomorrow. Meanwhile, in New York, jurors are deliberating in the tax fraud trial of Donald Trump’s business.

Here’s what else has happened so far today:

Meanwhile, Democrats have settled on a new leader in the House of Representatives: Hakeem Jeffries, who is set to steer the party through two years in the minority beginning in 2023. The Guardian’s Edwin Rios has more about Jeffries, who could one day become the next House speaker:

Democratic congressman Hakeem Jeffries first emerged in the mid-2000s as a former corporate lawyer homegrown from central Brooklyn. With his focus on criminal justice reform and housing affordability, he was seen as a progressive of the moment who took on the existing Democratic machine in New York.

Now, as the newly-elected successor to House speaker Nancy Pelosi, Jeffries has graduated from state politics to the national stage with the opportunity to make an impression on American politics for years to come.

Last week Jeffries, 52, became the first Black leader of either party in Congress. Under the incoming Congress, Jeffries will be House minority leader, making him the most powerful Democrat in the House. His ascension, paired with the departures of longtime and elderly Democratic leaders like Pelosi, Steny Hoyer and Jim Clyburn, signals a shift for Democrats toward a younger, more diverse generation of leaders that will undoubtedly face tension with a new Republican House majority on the horizon.

The University of Massachusetts Lowell’s Center for Public Opinion reports Warnock has 51% support among likely voters in the state against Walker’s 46%. The data was collected from 1,300 people from 18 through 28 November.

Another conclusion of the poll: 54% disapprove of Joe Biden’s performance as president but would vote for him over Donald Trump in the 2024 presidential election.

Fresh off her re-election victory over a Trump-backed challenger, Alaska’s Republican senator Lisa Murkowski also condemned the former president’s call for the “termination” of the constitution: