Macron follows a well-worn path of French presidents, by veering to the right

When newly elected French President Emmanuel Macron triumphantly marched across the courtyard of the Palais du Louvre amid a sea of tricolor flags back in 2017, he promised to begin a new chapter in the country’s history. “I want it to be that of renewed hope and confidence,” he declared.

Macron had campaigned with the slogan, “neither left nor right.” But he now appears to be lurching in the latter direction. Two controversial bills, and increasingly inflammatory rhetoric coming from the Interior Ministry, are evidence of this.
With the presidential election just 17 months away, the 42-year-old risks losing support from many of the left-leaning voters who helped him win office in the first place.
Over the past three years, 43 MPs have either quit or been thrown out of Macron’s party, La République en Marche (LREM), created in 2016. Some of them had been experts drawn from civil society who had entered parliament keen to reshape the well-worn mold of traditional party politics. Some felt alienated by the government’s increasingly conservative line. 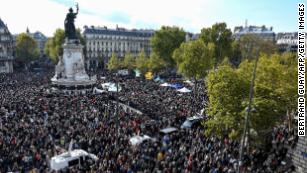 A teacher is beheaded, and France’s war over secularism, freedom of speech and religious equality reignites
“We are not the ones doing the betraying. On the contrary, we believe we are returning to our original values,” Emilie Cariou told French radio after quitting LREM in May to start her own green parliamentary group.
Political analyst Dominique Moisi believes that since he came to power, Macron has been trying to satisfy voters on the right, rather than his leftist base.
“There is this evolution which explains the disarray of some of the members of the LREM who left the party because they felt he was moving too much in the direction of economic liberalism and security conservatism,” Moisi told CNN.
Macron’s conservative overtures regarding security were apparent when his party presented the “global security bill” in parliament. Article 24 of the bill would ban the dissemination of images of police officers with the “intent to cause them harm.”
If it becomes law, offenders would be subject to a maximum one-year prison term and a $54,000 fine.
Many fear the bill would make covering protests and police brutality more difficult for journalists. After widespread protests, and with journalists and human rights organizations decrying article 24, Macron’s government bowed to pressure and on Thursday, the Prime Minister’s office announced article 24 would be amended to ensure it did not “prejudice the legitimate interest of the public to be informed.”
During a debate Friday in Parliament, Interior Minister Gérald Darmanin addressed the criticism, saying journalists and members of the public “can continue to film and broadcast but you cannot give names and addresses of our police officers who want to serve the republic.”
But sharing images “intended to harm or incite violence would violate the law.
Parliament voted to approve the controversial article Friday. The entire global security bill faces a vote Tuesday before going to the Senate.

There are currently only two Jewish heads of state...
Read more
News By Country